Thanks to the genuis and the voice of Nusrat Fateh Ali Kahn (1948-1997), the force of qawwali is known the world over ; everyone has been waiting for a new artist with a sufficiently virtuosic talent and freedom of approach to take up Nusrat’s legacy. Here he is.

Born in 1962, this young qawwal has an especially distinctive tone and vocal range which in many ways recall those of his illustrious predecessor, whose compositions he often revives. He has no scruples about distributing the ritual order so as to arouse the emotions of the audience and impose his personality as a soloist. Faiz Ali Faiz is unquestionably the major new voice of qawwali.

The Qawwali is a syncretic musical form from non-orthodox Islam in South Asia. The term comes from the Arabic word qaul (to say, word) and denotes both a musical genre from India and Pakistan and the actual form it takes.

It is a sacred song designed to convey the message of Sufi poetry in the assemblies of auditions (sama’), with specific musical characteristics : the use of powerful male voices, with solo and chorus alternating, repetitions and improvisations by the accompanying drums and vigourous hand-clapping, the continual introduction of foreign elements ( poetic and musical quotations) into the original structure in order to reinforce the impact of the “world” on the audience and by extension, to arouse the emotion of mysticism in them, which can go as far as a state of trance. 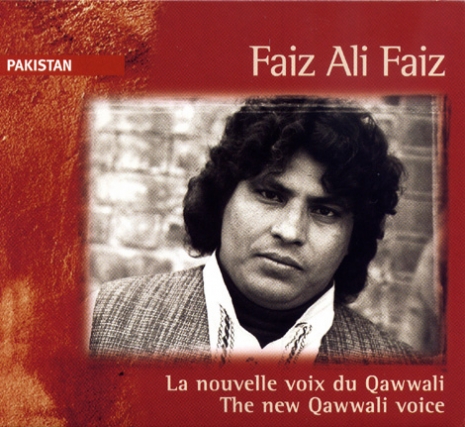