Who are the princesses of Arabic song? If they had to name ten, twenty, fifty of them, no two connoisseurs would agree.

But if there were a choice of only three names, they would be those of Oum Kalsoum, Fairouz and Asmahan. Princesses, queens, empresses, whatever. These three hold court above all the categories: glory, power, legend, splendour... Dorsaf Hamdani sings all three of them : the sophistication and virtuosity of Oum Kalsoum, the distinct vocal timbre and revolutionary tastes of Fairouz, and Asmahan's emotional depth and natural affinity for drama...

But Dorsaf Hamdani does not want large, cinematic, string orchestras or the synthesizers of Arabic modernity. The oud, qanun, violin, ney, tar, darbuka: the resolutely timelessness of a small cabaret or concert hall group. Dorsaf takes great classics of her three predecessors, but also some pieces recalling their inventive power and artistic freedom, like Layali el ons, a European waltz combined with the tarab (Arabic classical music with an ecstatic, trance-like effect) created by Ashaman.

"More than the three singers' technical perfection, I try to understand what planted them in the memory of the Arab people." 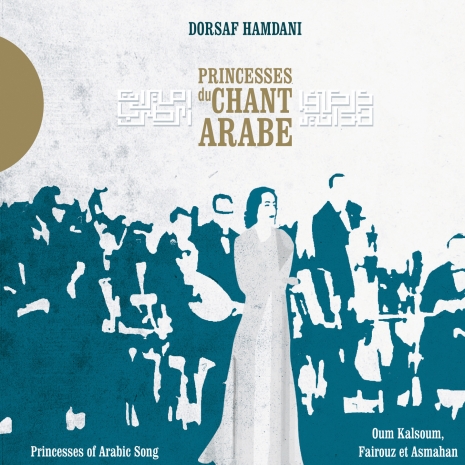